Wired magazine has said that John Maeda is to design what Warren Buffett is to finance. Forbes named him one of the most influential people of the 21st century and millions have watched his TED talks. John is an MIT-trained engineer who became an artist in his mid-twenties and is known for his tech-enabled art, some of which is in the permanent collection at MOMA. He’s won several top design awards in Japan and the United States and has written best-selling books on design and business, including The Laws of Simplicity, which outlines interaction design principles for products and services. John was a professor at the MIT Media Lab and served as the president of the Rhode Island School of Design. He believes that art and design will transform our economy in the 21st century like science and technology did in the last century. Today he runs the design team at Automattic, the creators of WordPress, an open-source platform on which a quarter of the world’s websites are built. I caught up with John for this interview at MITX’s 2017 FutureM conference in Boston.

Kay: What kind of work you do at Automattic?

John: I have a long title—I am the Global Head of Computational Design and Inclusion. What does that mean? Well, Global—I’m in a company that is across 60 countries with 600 people, all working remotely. There’s no headquarters. And “Computational Design”—I’m interested in design that has been affected by Moore’s Law. Any type of computing-related design is my interest, which today is almost all kinds of design. And “Inclusion”—meaning that you can’t design without thinking inclusively. So that’s what I do. I work with a team of designers and product people and I help to coordinate their activities to hopefully produce better, more inclusive products.

Moore’s Law is a computing term that originated around 1970. The layman’s version of Moore’s law states that processor speeds or overall processing power for computers will double every two years.

Kay: What kind of users do you focus on to make sure WordPress is inclusive?

John: Advanced users aren’t hard to find, they use these tools every day, but they aren’t the real customer. The real customer has never seen the product before, never pressed those buttons or touched it or understood what it does or why it does it and why should it matter to someone. So, I’ve been on journeys across the United States to visit parts that don’t use computers all the time. And people ask me, “Why do you go to parts of the US that are in economic decline?” It’s because that’s where they have the least access to computing. And by working with them, I understand the extreme case of what some of our products could do for them. And then the reaction is often,

“Oh, that’s so good that you help those poor people.” And I say, “Understand: they’re helping me become less stupid.” Because I’m so smart that I’m stupid about knowing what actually somebody wants. They’re just regular people. They’ve been left behind by the digital revolution. They’re not working in Silicon Valley. They aren’t using the latest technologies because they’ve been too busy just trying to feed their families.

I study how they configure their businesses. How in the heck is this thing that we’re doing going to be useful to them? It has to begin from understanding what they need.

That’s fun to watch by bringing in actual stakeholders who make this stuff.

Some people thought that we were competing in the website market, like WordPress versus other different platforms. There’s tons of platforms out there but over time, I realized that the competition isn’t other website builders; it’s brochures. Little shop cards. Little things that you can hand out are bigger competition when you’re working with these small, local businesses because the need for the Internet isn’t as high.

Kay: In your research process, you go where the users are and bring the makers with you.

John: Yeah. It’s part of a philosophy I developed. I realized a simple design principle that Bill Moggridge—one of the co-founders of IDEO—pointed out, design really isn’t about the making. It’s about the people. The design principle is how to get people to work together. It’s everybody. That’s my design philosophy.

Kay: Are you methodical and systematic in the way you do your research? 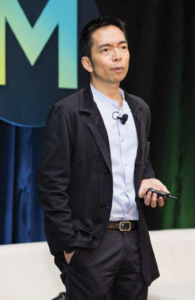 John: I think if you were in a superlarge company, did a lot of roles and you’re working with a life-or-death product, like a nuclear reactor or some kind life-threatening thing, you do need those kinds of controls. But I think for general products that are more lifestyle products, more nice-to-have, versus  essential-to-have, the kind of people who are working those systems tend to be less rules-oriented. You have to find a way to kind of nudge the system to produce an outcome.

I think that the fallacy of people who hold on to expertise is that they prevent more permeation of the skills. So I think that the researchers who are inclusive of other disciplines are the ones who will have the longer career arc versus those who try to hold on to the way things used to be with kind of a shield around them.

That shield is breaking now, especially given the trajectory of computing and machine intelligence. If someone asked me, “When do you think it’ll happen?” I think three years from now. I think computers are going to be disturbingly capable. They already are but we forget that computing time is not linear. It’s exponential.

So in three years, computers will be four times as fast as we consider them now versus like, you know, one point two (1.2) times better. And four times better is going to be pretty amazing.

Kay: With machine intelligence, how will companies gain intelligence about their customers?

John: Oh, they’ll be using primarily the rich data sources that exist, which is a huge problem because they’re filled with bias. Qualitative researchers need to recognize that the world is going to be even more numerically inclined because the processing power will be there and the data will be there. And why should I believe you, lone person, when these data say this? Qualitative researchers have to fight even harder, not because of self-preservation, but because the products will be very poor to serve people who are outside that band of what is normal.

Let me give you an example with Google Translate. Research at Princeton showed that if you try to ask Google Translate to translate the Turkish phrase “He is a doctor. He is a nurse,” it comes back as “He is a doctor. She is a nurse” because the statistical inclination of past data will say that more women were nurses. But if you update it to today, there’s probably more men, but the data lag the reality, right? Or in the United States, it might be easier to sentence people using past sentencing data which are biased towards people who are poorer, live in bad neighborhoods, and tend to be African American. Now you’ve biased an entire machine intelligence to sentence someone who’s from one of those regions. Right?

Kay: How should qualitative researchers work with AI?

John: I would advise them that they stay on top of machine intelligence— research Tensor Flow from Google. It’s a winning algorithm right now. And just be aware that this is all coming and not to be afraid of it. I mean, the worst thing to do is be afraid of something. Usually you’re afraid because you just don’t understand it. So my advice would be to learn the most advanced quantitative methods sitting out there. Use them. Try them out. Research their flaws. And research how they’re better than existing qualitative methods. And that kind of person is going to be resilient for the future.

Kay: In The Laws of Simplicity, which you  wrote in 2006, you described your worries around privacy and the volume of data that is being collected on us. Today the problem is so much worse and because the user interfaces are so simple, we don’t see the data that’s being collected or where that data’s going. How do you feel about this issue ten years later?

John: I don’t know. I definitely don’t like it because I have a fairly good understanding of what’s happening. That said, I give in to the convenience of giving away privacy because I know it can do so much for me. Like if you told me not to use Google Maps anymore, I’d get lost all the time. Do I like the fact that Google knows where I am and where I’ve been because of it? Not at all. Do I like that I use Gmail and Google can mine all my past thoughts? I don’t like all these things. But I have to do it. So I worry more about those who don’t know anything about what this is. That’s why I appreciate the Europeans. The Europeans have a much more stringent data collection policy. You get all those notices. The Europeans are working very hard to prevent themselves from being monitored. They remember what can happen if that happens.

Facebook feels so good. Slack feels so good because they’re not open source systems. They’re paid for to be made perfect to gather all that information. Whereas open source software isn’t like that. But if open source software were to be made to feel good, to work well, and people used it, they would no longer be giving out their data to be parceled and resold. Facebook is like Disney World. I’m sure you’ve noticed that you can’t go into Disney World or Disneyland with your own food. You have to buy theirs.

Kay: Yes, they frisk you at the entrance.

John: It’s to monetize their existence inside of that wonderful world. So I think that we’re giving up so much of our time and freedom in these systems that are optimized to take from us. Whereas with open source, the philosophy is they don’t take. It’s for you to keep your own data. The podcast you make isn’t kept; it’s your data. The post you make is yours. But the other platforms, they take it and you can’t easily take it out of there.

Kay: Right. Because it’s somewhere out in the ocean now.

John: It’s in the ocean—yeah. And they’ll say “Yeah, we’ll help you take it out,” but they have no interest because they want you to stay there.