Background to the Journey

UX Lex is “an evolving, interactive glossary,” which started with User Experience (UX) research terms, and has since evolved to include market research terms as well.

Eighteen months ago, my search indicated such a glossary didn’t exist, but I knew there was a need for a credible and comprehensive source that tries to tie down a common language for our industries.

Along the way, some eighty-plus people from five continents have been involved from across different disciplines within the research community. Janet Standen has been a major contributor and collaborator in getting this beta test out into the world—and we are proud to keep working to make it better and better.

The phrase “two nations divided by a common language” comes to mind. I thought that the research world had “many disciplines divided by a common language,” but as it turns out, even within the UX world, there were many nuances to understanding every term those of us in the industry currently use, often unaware that there is no common understanding.

Triggers to the Journey

In 2020, my user research courses touched 3,200-plus students and other interested parties around the world. As such, I regularly field a boatload of questions about the topic. Here are some examples that represent the confusion I see in my consulting work as a design and user researcher and a global educator through Curiosity Tank and at other institutions.

The questions, and confusion, go on and on.

These points of confusion inspired me to search for a trusted source that defines the meaning of these terms to spark dialogue with colleagues and clients, and to recommend to my students. But guess what? Surprisingly, nothing comprehensive existed, even in the UX-sphere of digital, interactive everything in 2021!

It’s ironic. Those of us who work in UX, user researchers included, aspire to create terrific user experiences. That’s what we do. But what we have done with our own terminology is to create a mess.

Other professionals such as pharmacists, architects, and even ophthalmologists all have industry dictionaries or at least glossaries that help them establish a common understanding of terms. As of yet, this does not exist in any comprehensive and credible form for the UX or research professions.

This is a story about how eighty-plus UXers from around the globe began to address the problem in September 2019.

Our background before becoming researchers and our role as researchers significantly affected our interpretation of many commonly used terms. If you come from the market research field, you likely interpret key terms one way. If you come from academic research or UX design, you likely interpret them differently from the other disciplines and even from each other within your own research discipline.

In 2021, we have more people entering the workforce who aspire to become user experience researchers than ever before. They may have one of the varied backgrounds above, come into the field straight from school, be self-taught, or arrive via a completely different route—say, sales.

So from where are people drawing their understanding of different terminology?

It’s a mess right now. It doesn’t just impact those of us who teach and work in the industry—it impacts newcomers, our hiring decisions, and our clients too. Here are some more examples:

Have any of you experienced any situations like these? Probably, so it was clear that we had to do something about it. 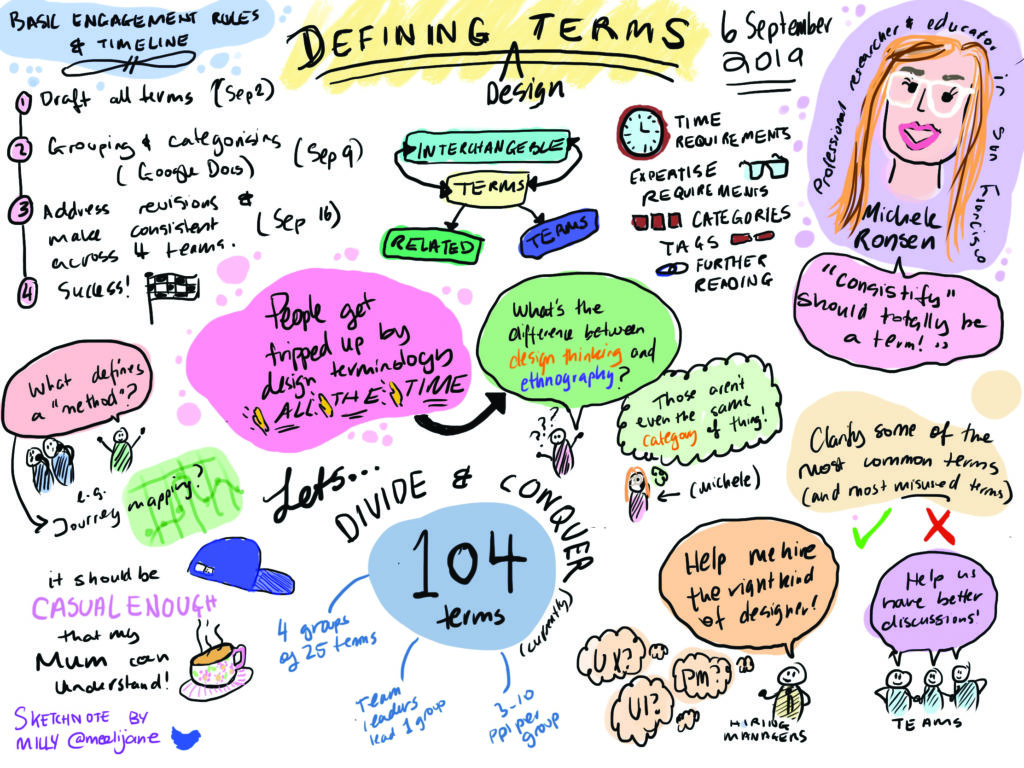 I started to take a note of every term that came up that could be interpreted in various ways, and I quickly had a list of one hundred terms. The acronyms, oh my!

I knew I couldn’t take on defining these terms by myself. This project wasn’t a one-woman show even if bandwidth wasn’t an issue. Why? Because I knew that a variety of perspectives would be key to its success and usefulness. Plus, I am a very collaborative person by nature.

So, I decided to crowdsource (even though I had never crowdsourced a thing in my life before). I solicited volunteers from a research-focused Google group and via a post on LinkedIn. That’s when coauthor Janet Standen became involved!

There was an amazing response; I heard from about fifty people from all around the globe within forty-eight hours. I quickly organized two kickoff meetings via Zoom to gather input.

I formed five teams, each with about seven to ten people, and gave each team thirty terms to tackle. I established a team leader for each team: Kaleb, Roxy, Danny, me, and, of course, Janet.

I created a Google doc for each team, so they could all work simultaneously, and set a tight deadline of just ten days to complete the first round of draft definitions.

Ultimately, I had a vision of a dynamic, living, and breathing execution for each comprehensively defined term. Initially however, each term had to be drafted, so as a starting point the following headings were included in the Google doc:

At the end of those two weeks, 150 terms had been drafted, and the UX Lex was born—affectionately nicknamed by Janet! An example of the initial draft of the “Affinity Map” can be viewed in Exhibit B. 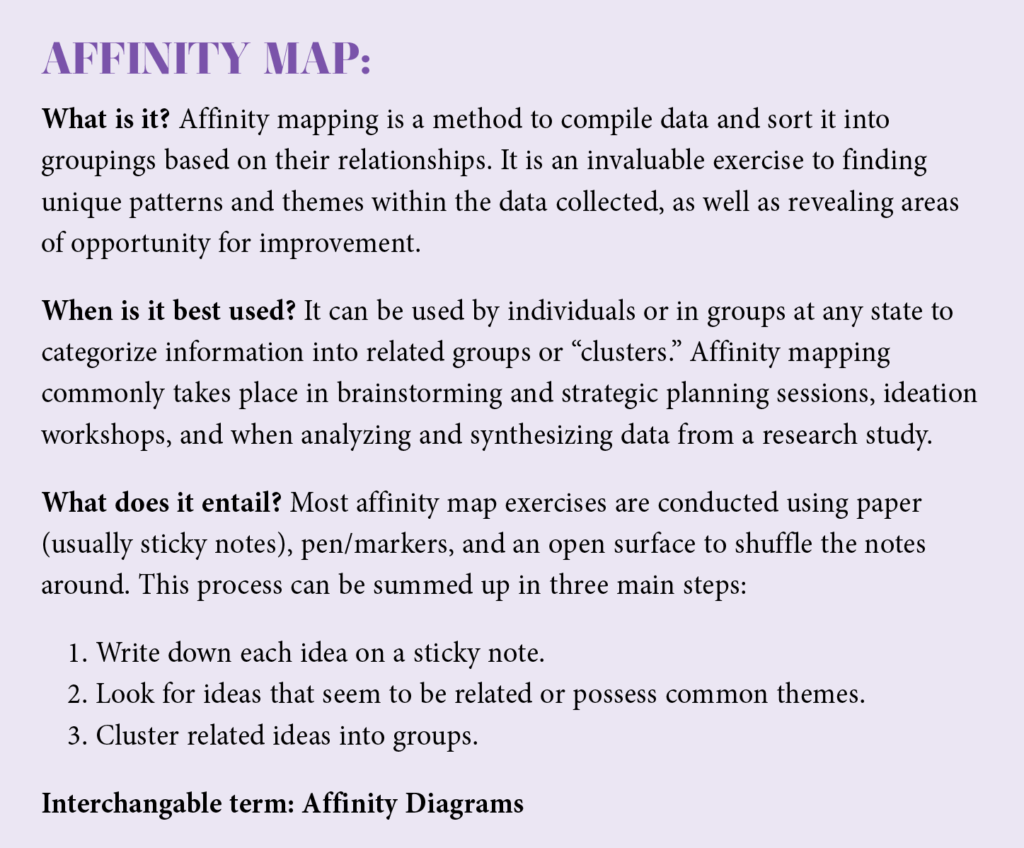 I happened to be teaching the University of California, Berkeley Extension course on User Research for UX, which provided an excellent real-life UX research project for my students—and thus the students stepped in. (These students and all those who were crowdsourced are credited as contributors on the UX Lex.)

The students started with initiating secondary research to review and update each of the drafted definitions. However, it was hard for them to find credible sources for their fact-checking mission. They also came across a lot of jargon as well as acronyms they did not understand, which had been used by those with more industry experience. Because of this, we have included an Acronym Decoder within the UX Lex (see page 34), and this will continue to grow as new acronyms come to our attention.

Although it was hard for the students to fact-check the initial draft definitions, they did start the process of clarifying each entry, and importantly, made each drafted definition more consistent in terms of character count, tone of voice, format, etc. Some of the initially drafted terms were a page or longer, while others were very short and lacking in depth of explanation and/or accuracy.

The students then conducted generative research to understand how different people within the UX and research industries might expect to use a UX lexicon. Their audience spanned those new to the UX industry and those with many years of experience, as well as people from different disciplines within the research industry.

The students used their learnings from the generative research phase to inform the development of initial concepts. These included two new sections for each term:

The students then conducted evaluative research with their wireframes (shown on this page)—again conducting their research with new and more advanced research practitioners from the full spectrum of disciplines, to get feedback on their prototypes. There was considerable consistency in their learning. However, one key learning was that those newer to the industry might want to look up terms by a category, as they may not know the term they are looking for. Thus, a further heading was added: Category Type. 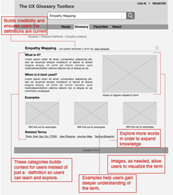 Where Are We Now?

The Beta version of the UX Lex is now housed on the Curiosity Tank website, www.curiositytank.com/ux-lexicon.

Over the past few months, Janet and I painstakingly worked together dissecting, discussing, debating, and thoroughly checking each and every term during the latest phase of the UX Lex’s development. It now stands at 200 terms, and it’s still growing.

There is now a refined version of the Affinity Map, along with additional resources to learn more about the term. We’ve come a long way! 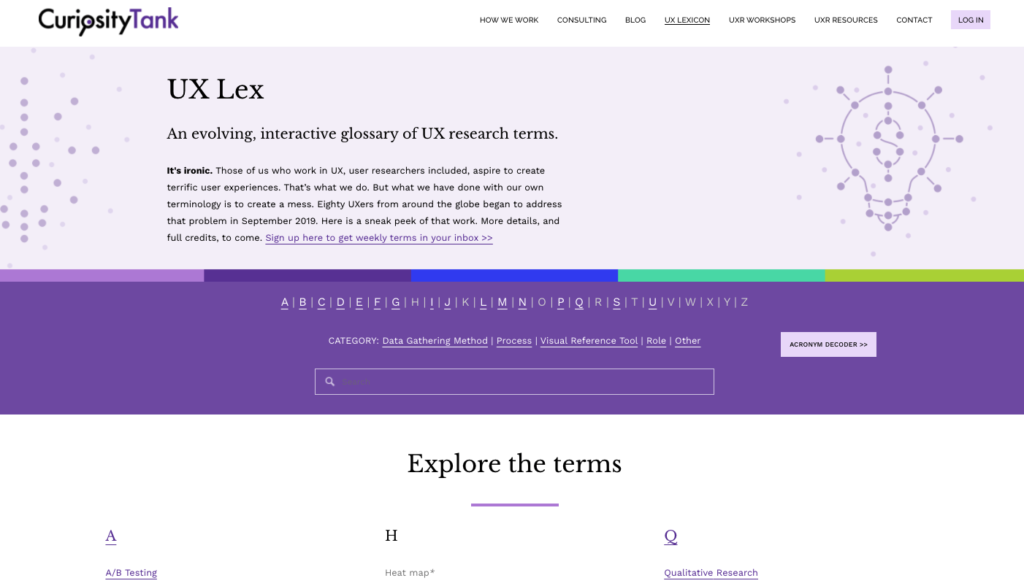 The UX Lex is not complete; many definitions still need further massaging before they can go live. Because Janet and I come from different backgrounds (I am from the UX research world and Janet’s experience is in market research), these further discussions give me even more conviction that this tool will be invaluable to all those involved in the research, broader marketing, and product development worlds, whether they are students or have many years of experience.

As you will see, if you go to the Beta UX Lex, I have built in a “share feedback” functionality providing the opportunity for anyone to contribute ideas for new terms, how to make any existing definition better, or anything else for that matter.

The Acronym Decoder within the UX Lex was created by us based on the student feedback about the confusion caused from our industry’s acronym overuse. Eighty acronyms are already included! 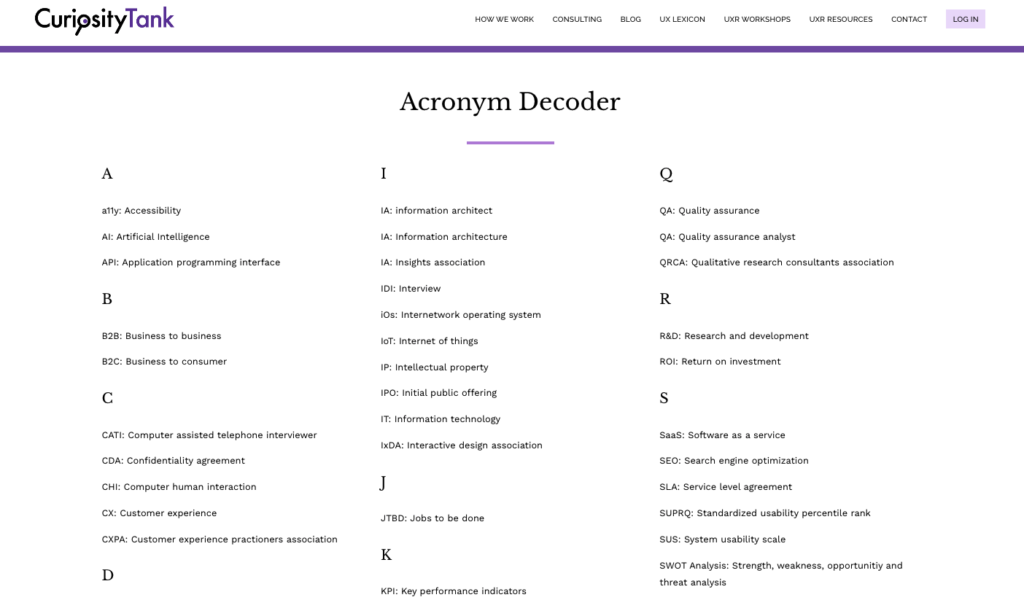 We believe the professionalism of our industry will be enhanced by the creation of this new tool—the UX Lex. My hope is it will provide a common focus from which to discuss differences of opinion about the meaning of terms in our industry, whenever a debate arises. With greater clarity in our language, perhaps we can achieve better mutual understanding, leading to greater efficiencies and a lot of time saved!

If this tool helps to bring our industry together behind a shared understanding of our language, or other benefit, then all the time and effort will be worth it. Although the nickname for now is UX Lex, the intention is to include terms that span the full spectrum of research and product development disciplines.

We leave you with these three takeaways:

Sign up for a weekly term to land in your inbox by visiting the UX Lex at:
www.curiositytank.com/ux-lex-weekly-emails.