OK, I’ll admit it… I’m a pickleball addict! I do my best to arrange my business travel, vacation travel, and a large portion of my free time around the fastest-growing sport in America: pickleball.

By way of introduction, I started my independent insights consultancy twenty-two years ago and named it Beacon Research (a blend of my love for sailing and passion for understanding consumers) after working in both the corporate and agency side. When I launched Beacon Research in 2000, I immediately started dabbling with online methods to see if there might be a way to cut down on the amount of travel that was needed. As a newer mother, I was trying to balance work and family. For the past two decades, digital methods have accounted for most of my work, though I still travel to conduct in-person studies, too.

How I Got into Pickleball

In 2016, I was captain of a USTA 40+ 4.5/5.0 tennis team. During a team practice for our upcoming trip to Nationals, I noticed a flyer on the fence surrounding the tennis courts announcing a new pickleball league coming soon to Annapolis, Maryland, on Monday nights.

Recent empty nesters, my then-husband and I were actively looking for a new hobby to share. So, I came home and announced that I had found it! We should play in this new pickleball league! We signed up and started playing without even knowing what pickleball was, then ended up winning the beginner league in the fall and moved up to the intermediate level in the spring.

Tennis Injury Made Me Focus on Pickleball

Two years later, I was still playing competitive tennis when I had a very painful and debilitating injury. It was clearly up to my court whether my team advanced to postseason play. While I played on as long as I could, I tore both tendons in my dominant arm. I was told I could not play tennis or pickleball for nine months, and that was a life changer for me.

My Pickleball Associations and Clubs

That fall, I became an ambassador for the USA Pickleball Association and volunteered my time teaching more newbies to play. I worked with both local communities and recreation and parks departments to create more pickleball courts in our area to help keep up with the growing demand for pickleball.

Then, when the pandemic hit and competitive tennis shut down entirely, I suddenly had a lot of extra time on my hands after eighteen years of captaining and playing. It was during this phase that I shifted my competitive needs from tennis to pickleball.

In 2021, I helped bring skill-based ladder leagues to my local Annapolis Pickleball Club. More recently, I participated in my first team pickleball league in Florida, where I wintered for the first time ever. Now, I am thankful to have sponsors who help with my play as I help grow their brands (e.g., Engage paddles/apparel, Tyrol pickleball shoes, and SofiBella apparel).

So, what makes this latest passion of mine the perfect fit for me as an independent qualitative research consultant, that also integrates well into my business and leisure travel plans?

I Use These Four Steps When Planning In-Person Business Trips

In 2018, I came to Phoenix three days before the start of the QRCA conference to play pickleball at several nearby venues. I even played early one morning before the conference started, which really helped me make it through the long day of sitting in sessions.

For the originally scheduled January 2022 QRCA conference in San Diego, I had planned to come in early and stay longer to play pickleball with friends. To make that happen, I identified the pickleball venues that were midway between the conference hotel and homes of my California-based pickleball friends, then chose the two airports and booked my flights around where we could play. Unfortunately, I had to skip the rescheduled QRCA conference in May as I had already qualified to compete in the National Senior Games in Fort Lauderdale on the very same dates. I missed seeing my longtime QRCA friends and making new ones, as I’ve made it to seventeen QRCA conferences since launching Beacon Research in 2000.

On a recent trip to Chicago to attend the annual planning meeting with my brother who has Down’s Syndrome and lives in a group home, I first joined local pickleballers in a round robin and got to be the photographer for one lady’s birthday celebration. When they learned why I was in town, they insisted I come back after the meeting, along with my brother so that they could meet him, he could see us play pickleball, and we could try to get him to play (that didn’t work, though he sure loved meeting everyone and had fun coaching us from the sidelines). I also squeezed in a trip to my hometown of Crystal Lake, Illinois, and played pickleball with my high school tennis coach, her sister, the younger sister and husband of one of my high school classmates, and the tournament director of so many pickleball tournaments around the country, who coincidentally happens to be from my hometown.

Tournaments are also a great way to blend travel, pickleball, and friends. In addition to the National Senior Games in Albuquerque, I’ve competed in various tournaments around the Mid-Atlantic and across Florida, including the U.S. Open in Naples, the Delray Beach Open, the APP World Pickleball Open and PPA Riverland Open in Port St. Lucie, and the U.S. Team Pickleball Florida Cup in Daytona Beach. Competing is only half the fun. Tournaments are a festival-like experience that make it easy to see pickleball friends from all over and make new ones, plus watching the “pros” play is inspirational and, at this early stage in the sports lifecycle, also super intimate.

When I’m planning a vacation, I use the same process and also reach out to my fellow USA Pickleball Ambassadors to learn more about opportunities within that region. Then I string together a trip that includes playing multiple venues. An example is shown below with places that I played on a week-long New England pickleball vacation. 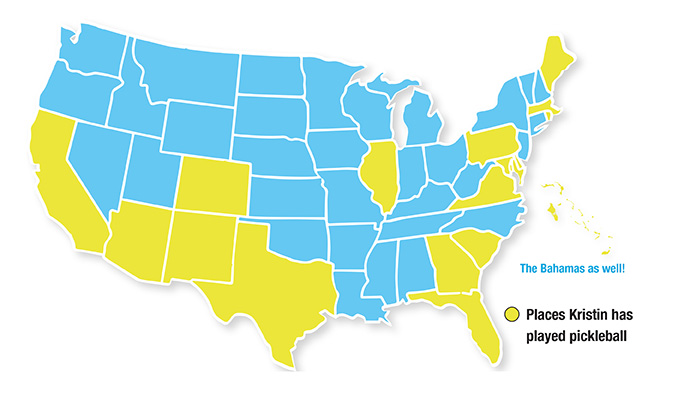 When I’m scheduling real-time remote research such as webcam interviews/groups and even client/team meetings, I do my best to protect certain days/times of the week when I know I have strong pickleball playing opportunities. This allows me to guarantee that my exercise actually happens on a regular basis and leaves me feeling refreshed and energized so that I can be more productive while I’m working.

Nowadays, pickleball can often be found being played seven days a week at nearby tennis courts, gyms, and recreation centers, with most venues active in the mornings (typically seven to eleven o’clock) and again late afternoons/early evenings. Pickleball’s explosive growth is making it a fun option for people of all ages and skill levels to play almost anywhere, at home, or on the road. Just beware… it’s addictive (albeit a very healthy addiction)!

﻿ Naomi Henderson opened RIVA in 1981 and is its CEO, directing policy and procedures for two divisions: Research and Training. She is co-founder […]

Attitude and Gratitude: An Autobiography by Patricia Sabena, Dorrance, 2021

Pat Sabena’s autobiography tells how she succeeded in qualitative research and in life, overcoming many challenges. Jay Zaltzman was inspired by her book and thinks it has important lessons for those getting started in the marketing field. […]